It amazes me, the amount of time people will spend sitting in front of a slot machine. Casinos don’t interest me much, but on a rare occasion my curiosity gets the best of me, and I find myself standing in a smoke filled room, bells and sirens blaring all around me, full of people, or what may be better described as the sitting dead, gazing with blank stares at the colorful, gold and silver trimmed machines they are camped out in front of. Some of them look like they have been there for days. Sitting motionless except for the pulling of a lever extending from the side of the machine with one hand and the occasional drag off their cigarette with the other hand. We humans are odd creatures. Addictions come in many packages, and for the gambler it’s all about the possibility of the big payoff. Not in hopes for financial stability or to pay off debt, but to simply continue playing the game. I’m often asked as a dog trainer who uses treats, “but will I always have to use treats to get the dog to do what I want?” The short answer is no, primarily because when it comes to gambling, dogs are a lot like us humans. That’s right, dogs are gamblers, and when it comes to training, that’s a good thing. Or at least some times it is.

The key is to get them addicted, not to the food, but to the game. When we humans first step into a casino, we have high hopes but are nervous about blowing our money all at once, so we search out the games that are cheap to play. Although we know we are not going to have a huge payoff, we know there is a better chance of getting something. And since those payoffs are relatively often, no matter how small, we are reinforced for playing the game. When we get hooked on the the excitement of playing the game, we move to more challenging ones, knowing the payoff is not going to be as frequent, but also knowing the possibility of a larger payoff is possible. In the beginning stages of training a dog, his payoff should be often. After he is past the initial learning stage, you can make the payoff more random, paying for every three or four behaviors then back to every one or two. Make it as unpredictable as possible, getting him hooked on the game. As he gets better at it you should up the criteria by asking for more difficult behaviors before paying him. Occasionally let him hit the jackpot (a bigger, better reward). He will continue attempting more and more difficult tasks in anticipation of a big payoff. Soon rewards are much less frequent as he has become addicted to the game. This is not to say that we should be cheap and not pay our dogs well for the hard work they do while trying their best to fit into our society – especially considering that they didn’t ask to be a part of it. We should be as generous as possible, because, in my opinion, there is no jackpot equal to the unconditional love they give us.

We all know addiction to gambling can be devastating. Families have lost everything they own to gambling. Their homes, cars, jobs, and each other. A gambling addiction can be nearly impossible to break, because all it takes is one win at something as small as a scratch card at a gas station, or finding $20 on the ground, and the rush of adrenaline has you right back in the game. “My dog keeps jumping on me,” said Judy, a weary client of mine and owner of a massive Great Dane, (a serious gambling addict). When she got Marmeduke, he was the sweetest ten-pound bundle of legs she had ever seen. He was cute and cuddly, and when he raised his front paws up against her jeans to greet her, it melted her heart. How adorable! He wants to come up and give me a doggy kiss. Marmeduke is a year old now, and weighs about 130 pounds. He is still the sweetest bundle of legs she has ever seen, but along with a giant head and massive torso. He still loves to put his paws up on her and give her a great big slobbery kiss, but instead of melting her heart, he topples her over under his weight, knocking her to the floor then landing on top of her. She tells me, “I tried yelling at him, kneeing him, pushing him off but nothing works.” I asked, “Did you try ignoring him?” She said, “Yes, and he just keeps jumping up.” I asked her if she was consistently ignoring him, and she said, “I try, but sometimes I just get fed up.” Dogs are social animals, they love attention and love to greet us at the face. Most of us love it when they are puppies and are manageable, but by allowing them to jump up and give us sweet puppy kisses, we are saying to them that this is appropriate behavior. And every time they are allowed to jump up, we are reinforcing that behavior. Ignoring them when they jump up shows the dog that jumping up gets them the opposite of what they are looking for. It is not reinforcing for the dog to jump up, so the jumping stops, in theory. It’s like sitting in front of a broken slot machine. Where we fail is not being consistent. If the dog jumps up on you 9 times, and on the 10th time you respond, he just hit the jackpot! Remember the people sitting in front of the slot machines that look like they’ve been camping out there for days? They are just waiting for that 10th, time, 15th time, or 20th time. Gambling is a powerful addiction and one that is hard to break, but when it comes to training your dog to function in a human society, maybe we don’t need to ban gambling. We just need to show our dogs what games are worth playing. 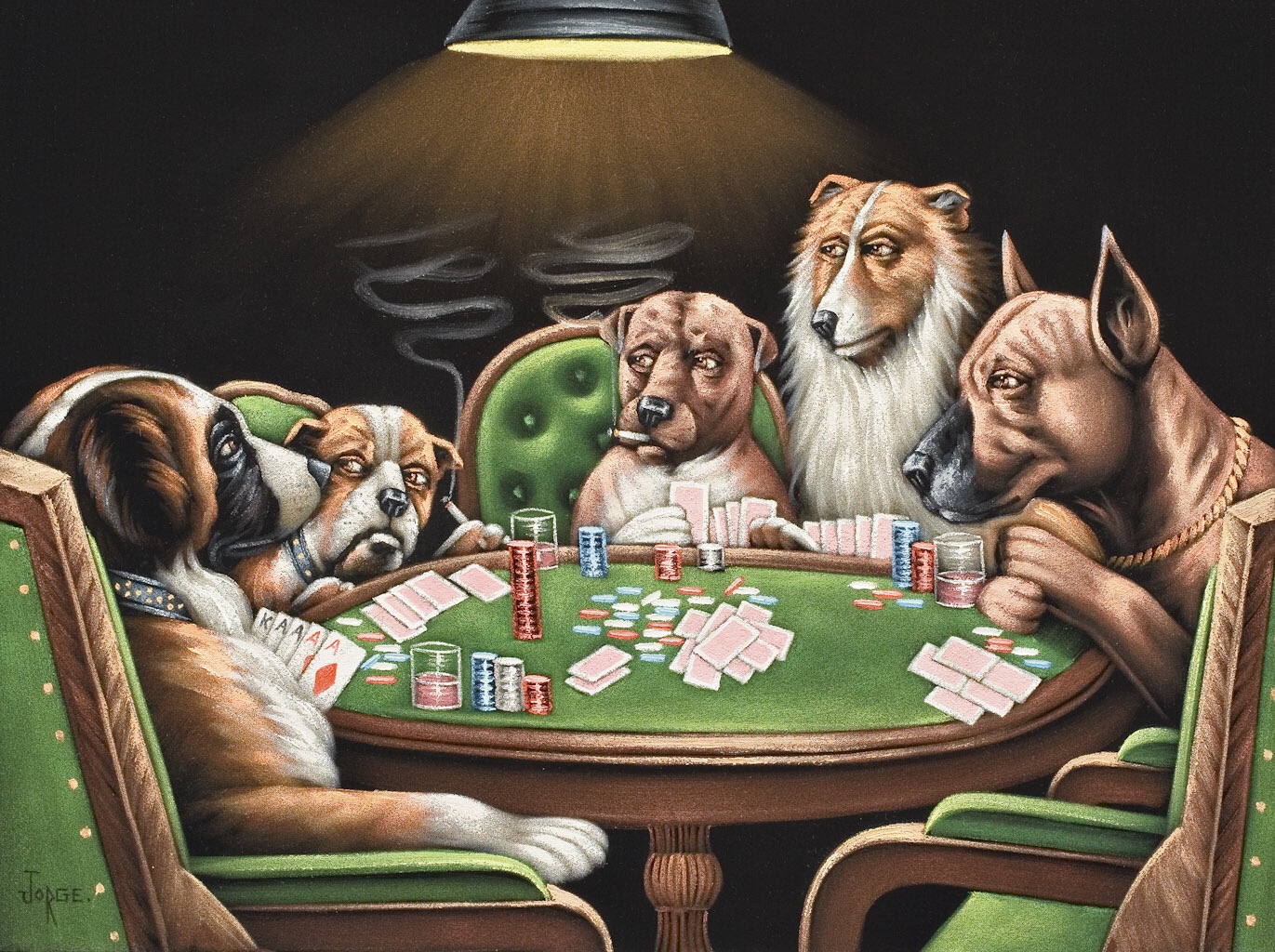 Teaching a dog to lay on a mat is a very useful command. It’s great for when guests come over or when your cooking or other activities where you need your dog to be  still. This video is the beginning of this type of training. Once your dog learns the place command and is reliably going to the mat, start putting the treats on the mat while she is in a down position  and work on duration waiting longer and longer between reinforcements. Soon you will have a dog who enjoys his down time on his Matt.