My Doxie is very reactive to doorbells so I have been teaching her how to go to her mat instead of running to the door and barking.

We’re not quite there yet but this little trick has helped. If you would like a bit more detailed description on how this works, or have other issues you need training help with, call us today to schedule a training consultation! Pricing and other info is on our services page.[wpvideo BgSA1J99 ] 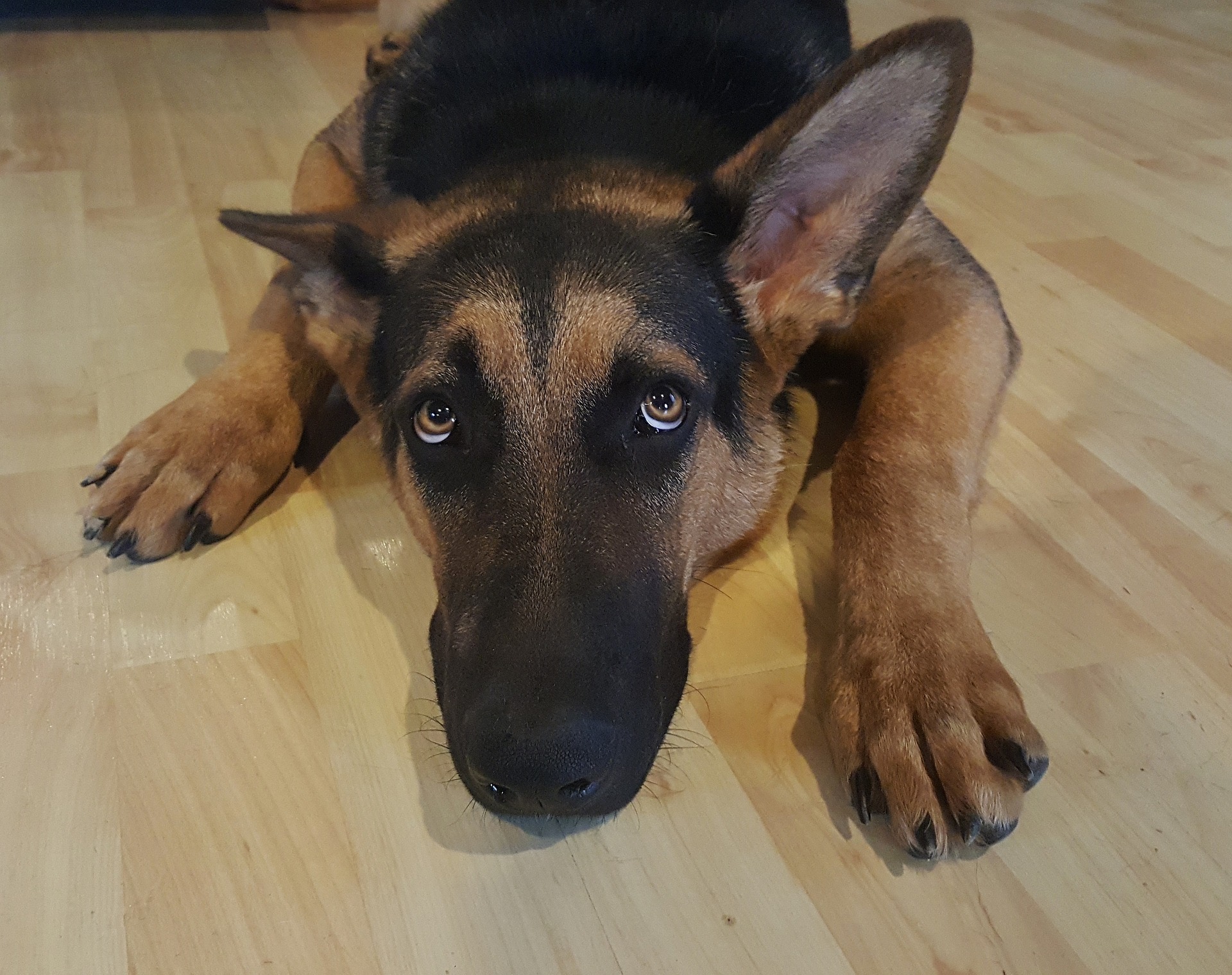 As I was sitting here listening to the thunderstorm passing through, and trying to console my sweet, sensitive GSD, I got to thinking about an incident that occurred during a training session I had about a year ago.

I had been asked to provide basic obedience training for a beautiful 10-month-old great dane who was having issues with jumping up on guests, bothering the cat, and stealing things from the kitchen counter. In other words, the typical scenario that trainers get called for.

When I arrived I could see her waiting to greet me through the glass door. She was a big girl and was jumping and barking in anticipation of meeting a new friend. The owner, to his credit, had her on leash so that she was unable to jump on me when I came in, and I made sure to commend him for doing so.

After some time she settled down a bit, and I greeted her, gave her a few treats, and began consulting with the parents. They were excited to see me and began telling me story after story of her antics. After the standard questions, and some evaluation of the pup, we worked out a game plan for training.

She was very friendly and responded  well to my interaction with her; however, I did notice a little nervousness if I approached her too hastily. I made note of this so that I would be cautious in our next session. When I left, I had a good feeling about how our first session went, and I was excited about returning. If I had only known what was to come.

WEEK 2: The following week I returned with a plan that was easy to follow and fun for the dog and pet parents, but the moment I walked through the door that all changed.

This time I caught the owner by surprise. He was not prepared with the dog on leash and opened the door. When the dog jumped up on me, he panicked and grabbed an air horn that was sitting near by and blew it toward the dog. In an instant, the dog bolted into the next room and hid under an end table.

For the next hour I could do nothing. She associated the sound that had scared her so badly with me, and from that point on she was scared to death of me. Occasionally she would come out, but if I made any attempt at interacting with her, she would go right back under the table.

So for the rest of the session we talked about fear and how debilitating it can be to a dog. I gave them some tips on things they should do to help her. Number one on the list was to throw that air horn away! I tried to explain to them how fear can generalize to all aspects of life and how cautious they should be moving forward to not add to her fear.

WEEK 3: I decided to bring my wife with me on the next session. I had hoped that she might be able to work with the dog, since she would have nothing to with me. But when we arrived, she began barking and ran into another room. I stayed back and had my wife approach her.

At first she was extremely nervous, but would very timidly take treats from her hand. Unfortunately that didn’t last long. Eventually she wouldn’t have anything to do with her either. I then asked the man of the house to work with the dog, and they informed me that she would no longer listen to him.

So after some investigation, I found out that he had tried the air horn on her a couple more times when she was chasing the cat. At first he was excited, because it worked. She no longer chased the cat, but in the process he had also taught the dog that he was unsafe, the cat was unsafe, going outside was unsafe, and it just spiraled down from there. He soon realized what a serious mistake he had made.

I was dumbfounded. I really thought I had made it clear, and that they understood and agreed with me, that they shouldn’t use the air horn. This poor pup who just a couple of weeks before was so excited to see me was cowering in a corner, and there was nothing I could do. The owners were devastated.

I desperately wanted to help her but was at a loss. I had worked with fearful dogs before, but at that point it would require a lot of counter-conditioning and desensitization which would require lots of time that the family was not willing to put in. Plus they lived about an hour away from me. Unfortunately I had to walk away. I gave them advise on technics they could try, a list of books to read and videos to watch, but I can only hope that they followed through.

I like to think that most people have come to realize that positive, force-free training technics are best and that using aversive methods in some instances are just simply abuse. However, I think many pet parents, like the man in this story, don’t consider that what is tolerable to one dog may be highly aversive to another.

There are the obvious things like hitting, kicking, and choking your dog, but to some dogs, yelling or other loud noises (air horns included) can traumatize them and can be just as abusive as a beating. Dogs that are scared of storms, loud motorcycles, vacuum cleaners, and other loud noises, struggle to live in this noisy world, and in many cases that struggle can lead to aggression.  We should be doing all we can to help them live happy, healthy lives, not adding to that fear by making them fear us.

In conclusion, this blog was not about calling out an abusive dog owner. It’s more about pointing out that we are not always aware of what our dogs are dealing with, or understand how they feel about the things we throw at them. We spend a lot of time telling our dogs what we want them to do and how to act, expecting them to understand us, never considering how it effects them emotionally.

How would you feel if you approached someone to shake their hand and in that instant your partner blew an airhorn in your face. What was communicated in that moment? Maybe that something bad was about to happen, maybe nothing. I’ll leave that for you to decide, but consider this: if you as a big-brained human are not sure, a small-brained dog just might be struggling even more.